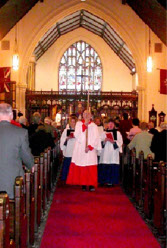 St. Luke’s choir is composed of diligent, talented volunteers from the parish who gather together to express their faith and talent through singing. Choristers range in age from the young to the more mature.

The choir sings at the main service at 10:30 am each Sunday from September through to the end of May as well as special services during Advent and Lent. In addition, the choir sings at Evensong three or four times a year.

Of special note is  the Festival of Nine Lessons and Carols held late in Advent, just before Christmas, as well as the services during the Triduum during Holy Week. 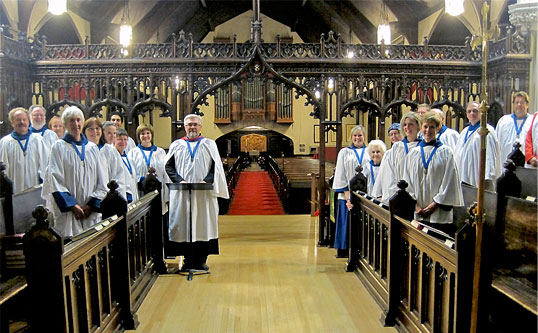 St. Luke’s Choir in the Quire.

St. Luke’s Choir is associated with the Royal School of Church Music. The RSCM is an organization based in the United Kingdom with affiliated choirs, schools, and individuals around the world. The RSCM’s motto: ‘I will sing with the spirit and with the understanding also’ is appropriate as they are committed to achieving the best use of good music in worship. Through educations, training, publications, advice, and encouragement, they aim to support church music today and to invest in church music for the future.

If you are interested in joining the choir, contact the Organist and Choirmaster. Rehearsals are on Thursdays at 7:00 pm in the boardroom and on Sundays at 9:45 am in the quire. While there is a significant commitment of time and effort, the result of the experience is meaningful and rewarding. 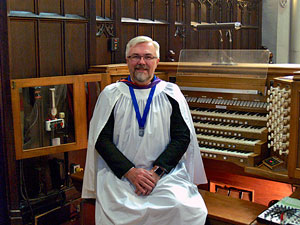 Blair is a member of the RSCM and the Royal Canadian College of Organists.

He would be pleased to hear from you via E-Mail.

Vincent Kinnard grew up in San Francisco. During elementary school he learned to play the guitar and piano.
In high school, he sang in two school choirs as well as his church’s solemn mass choir. He began studying organ in tenth grade and went on to Oberlin Conservatory in Ohio.

He studied organ in the conservatory for two years but decided to switch to the college. He continued studying privately with his organ professor for the remaining two years and graduated with a degree in Economics and Mathematics.

He would be pleased to hear from you via E-Mail.